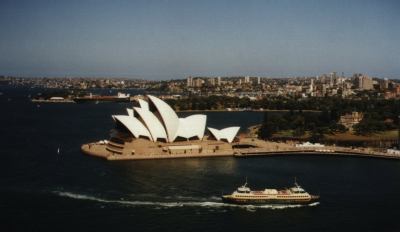 Sydney has a lot to offer. Whilst the city is not necessarily beautiful, it does have some fantastic views. Of course the Opera House is beautiful, as is Harbour Bridge and the whole of the Bay Area (best seen from Sydney Tower). There are plenty of beaches everywhere. Famous Bondi beach is nice and Manly Beach across the bay makes for a nice day out. If you want to cruise through the bay, save some money by not going on a tour and get the ferry to Manly. Then catch the last ferry back, just in time for a beautiful sunset view of the Sydney skyline.

I stayed in a place called the Globe Backpackers, right in the middle of Kings Cross. This is a weird place. It has quite a seedy atmosphere with a number strip joints in the area, but it is also a very lively and exciting area. There is always something to do here. The only drawback were the bikers which decided to leave every morning at around 4am, on their Harleys. And they certainly had no mufflers on their exhausts. Amazingly I actually to sleep though this racket in the last few days of my stay here. 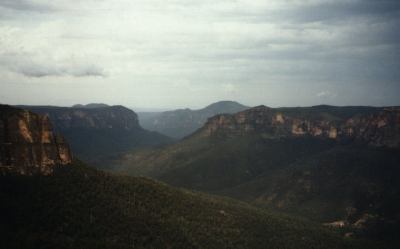 A nice day trip is to the Blue Mountains. They really are a shade of blue, which is due to gases given off by the Eucalyptus trees. This was my first experience of the vastness of Australia and was very impressive. As far as the eye could see there was nothing but mountains and trees. In this area there is also the worlds steepest railway (incline of 52°), the Three Sisters (three big rock formations), Boars Head (another rock formation), Mt Victoria and a seemingly endless sprawl of Eucalyptus trees.

After almost two weeks in Sydney, I decided to head on to Byron Bay and then to Cairns, via the Whitsunday Islands. 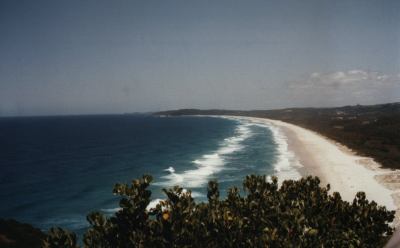 I bought a one month Greyhound Bus ticket for the east coast and headed off to Byron Bay, a hippie style hang out for alternative lifestyle like people. Actually I was told off by some geezer for referring to the place as a hippie place. Apparently the people here are not. Funnily he didn't give me any other useful term for describing the area. It has a very nice relaxed atmosphere and some beautiful beaches - even if I did get stung by a Blue Bottle (jellyfish). There's also a nice walk round Cape Byron. I stayed in the very relaxed Belongil Beachhouse a little out of town and enjoyed a nice few days here, before going on to Surfers Paradise.

Surfers Paradise is for Australians what Ibiza or Mallorca is for us Europeans. A holiday resort living purely from tourists. The funniest thing about it is though that the town planners don't appear to have an IQ of more than 50 between them. You see, what they have done is to build a whole load of huge tower blocks right on the beach front. Great idea it would be, except after about 2pm the whole beach is covered in shade from the blocks. D'oh. 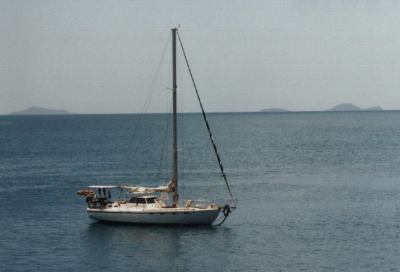 So having sunbathed in the shade for most of my time here I continued on to Aerlie Beach for a 3 day cruise of the Whitsunday Islands. Aerlie Beach is funny place. The only inhabitants appear to be backpackers. But the cruise was great, well it ought to be on the "Great Eagle". Sailing, that's a life I could get used to....shame I live right in the middle of Germany, about 500km from the nearest beach.

For the last stint of my Greyhound ticket, I got a bus to Cairns. I found Cairns to be a bit boring, but if you want to see the Great Barrier Reef it's a must. I did a one off dive on a boat called "Passions of Paradise" - beautiful. My next to stop was to be Darwin, but not wanting to spend over 24hrs on a bus I decided to fly.