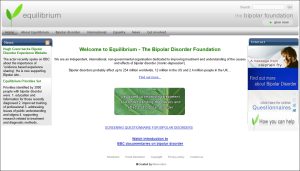 Equilibrium are an independent, international, non-governmental organisation dedicated to improving life for people with bipolar disorders. In 2006 we started work on this website. It is interesting as it contains a lot of stories from those living with bipolar disorder. These are written as part of it's Testimony Project and includes testimonies from people all over the world. The site launched in early 2007.

A complete redesign of the site launched in mid-2011. This site is based on Wordpress and represents a departure from the usual in-house CMS used at Minervation. Using Wordpress has helped the site focus more on blogging, staying current and interacting with users through social media.