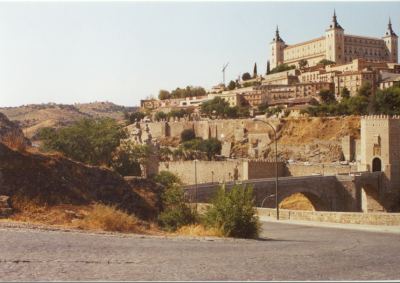 The first thing that struck me on arrival in Madrid was the relaxed nature of everything, especially for a capital city (compare London!). The second thing was the amount of people on the streets at midnight - it was a Tuesday! I knew I was going to like this place. 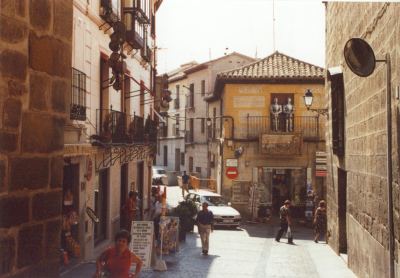 Madrid is a strange place, very lively and plenty to do, but somehow there are few things that are outstandingly beautiful. Certainly the Palacio Real is impressive in its size and the Plaza Mayor (and surroundings) is great for cafes and relaxing, but the beauty of Madrid lies in its way of life - busy, but still relaxed. The small alleys and roads around Puerto del Sol are great for wandering around in the evenings and the area around Lavapies contains a curious mix of Africans, Arabs, Asians and Caribbeans.

A nice day trip from Madrid is Toledo, a beautiful medieval town full of tiny alleys and cafes as well as an interesting castle (Alcazar) and Cathedral. There are also some nice bridges leading to the old town centre.

Would I recommend visiting Madrid? Just about - mainly for the attraction around it, Madrid not being particularly touristy. Could I see myself living there? Absolutely. Madrid appears to be more easily appreciated as local than a tourist. 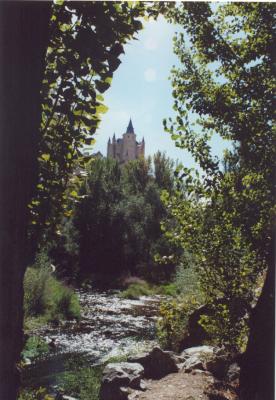 My plan was to head to Segovia for a day and then continue on to Avila, as they are just next to each other on the map. So on arrival I checked for buses from Segovia to Avila and found that the only bus that day was at 19.45! What sort of a time is that? Surely there ought to be one in the morning as well? So much for that idea. Anyway the things most worth seeing in Segovia (and you can hardly miss them) are the aquaduct and the fairy tale like castle. The aquaduct is noteworthy for two reasons. Firstly it is 2000 years old and secondly it it was built without mortar - just brick upon brick. 2000 years old and still standing - they don't build things like that anymore. The castle on the otherhand is a largely rebuilt structure after a fire destroyed the original. A fair bit of artisitic licence was used in the rebuild and whilst it looks extremely pretty, it is not exactly authentic. It does however afford nice views of Segovia and its surroundings. 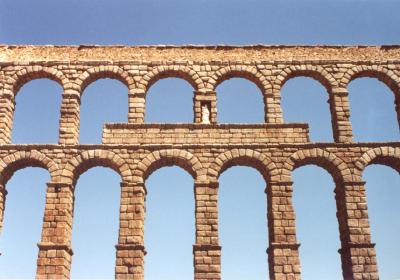 An interesting walk goes round the edge of the town (just follow the green route on the free tourist map) and winds through a nice park. It also gives interesting views of the castle. For fantastic views of Segovia take a stroll up the road to the bizzarly named village of Zamarramala(!). This is also a nice place to catch a glimpse of spanish village life. 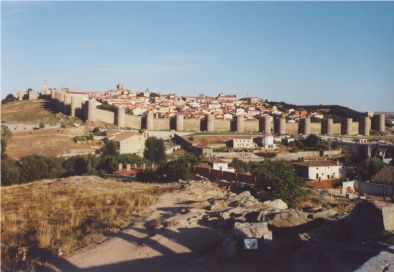 The next day I headed back to Madrid in order to get to Avila, due to the rediculous bus times mentioned above. The striking thing about Avila are its completely intact city walls. Also the interior of the cathedral is interesting and slightly dazzling, due to the red limestone in the bricks. 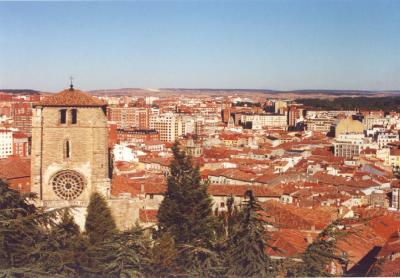 After Avila, my plan was to head north to Bilbao, changing in Burgos, but again this went horribly wrong. I arrived in Burgos and went to buy a ticket to Bilbao on an express train, but the train was fully booked. This is something unknown in England (trains are never fully booked, they just cram you in even tighter). So I ended up staying two nights in Burgos.

Initially Burgos struck me as rather dull, but this was probably due to the fact that it was Monday lunchtime and nobody was around. In fact there are a couple of nice monastries either side of the town. Both can be reached along interesting walks through parks along the river. There is also an interesting cathedral (as in all spanish towns) and there are nice views from the hilltop view point behind the cathedral. In the end I really enjoyed my stay here and it turned out to be a really lively city in the evenings. Next I headed back to Madrid for two days, checking out the Prado, before heading home.

To me the Prado is a very boring museum. Row after row of portrait paintings - unless you have a degree in "History of Spanish Art" you won't see much sense in all of this (well I didn't anyway). I spent 90 minutes walking around the place and only found four interesting paintings. There were the "El dos de Mayo" and "El tres de Mayo" by Goya, a painting of a woman squirting her breast milk into a priests mouth and a painting which included a man with a flower up his arse by Bosch, a flemish artist (which explains it all!).