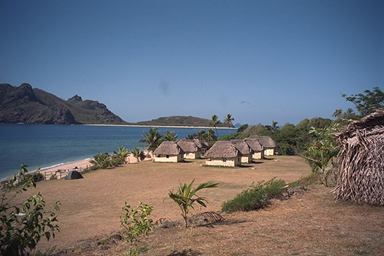 Flying to Fiji was a peculiar experience. I boarded the plane just 1am on Tuesday morning and arrived in Nadi, Fiji on Wednesday about 9am. A flight of more than 24 hours. What had happened? I crossed the international dateline and thereby lost a day of my life. In much the same way as Phileas Fogg and his sturdy companion Passepartout gained a day in Jules Vernes' "Around the World in 80 days", enabling them to win the bet. Except, of course, that I had more than 80 days in which to complete my trip and was much aided by the invention of the jet engine.

Having landed in Nadi, I had no idea where to stay, so I went with some tout to a place called "Sunseekers Hotel". Here they then suggested I go to "Waya Sewa" an island about 2 hours boat ride from 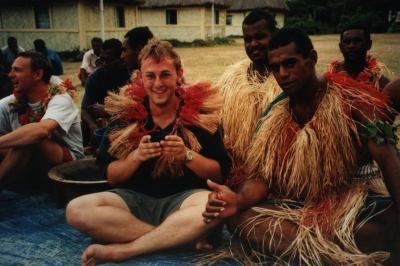 Lautoka, north of Nadi. The next day I got myself to Lautoka and boarded the little boat to Waya Sewa. I was not to be disappointed. This island is paradise. Accommodation was in a dorm in a little Burre and as you can see from the photo, the view was incredible and I had never before seen an ocean quite so beautifully blue. There was plenty to do (if you wanted), like snorkelling, fishing, diving, sunbathing and playing various sports with the locals. After 3 days in paradise, trying to come up with ways of never having to leave the island, I finally returned to the mainland. I went back to my old hotel and bumped into a girl who was there last time too. She had since been to Navala in the hills and urged me to check it out, for the experience of staying in a traditional Fijian village. So the next day I set out for Navala. 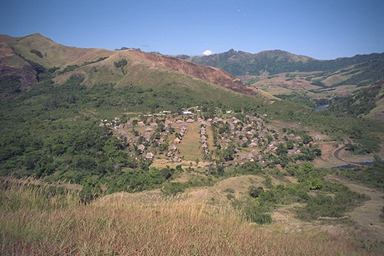 Getting to Navala was an experience in itself. First I had to get a bus to Lautoka, then another bus to Ba. Here I changed again and got the bus to Navala. The whole journey took about half a day. I was greeted by the "Head of Tourism" who introduced me to the Village Chief. After giving him a "sevu sevu" (gift), which was some kava roots I had bought in Ba, I was introduced to the family I was to stay with. They pointed me to the spot on the floor where I could sleep in their Burre and brought me some tea. This and rice was to be my staple diet for the next 3 days. 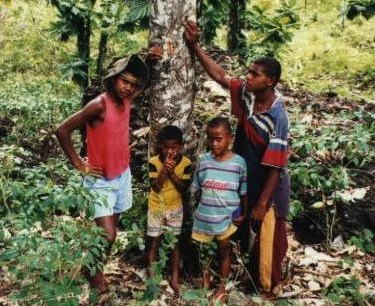 Navala is located in a beautiful setting in the central hills of the Fijian mainland Viti Levu. It is pretty much a self sufficient village, which has a school and church (catholic). Nearby is a river for washing and for the kids (and me) to play in. The family I was staying with was very friendly and interesting. They had a little 2 year old son and a 6 month old baby. The Burres contain one room in which the whole family and guests lives, eats and sleeps. No tables or chairs. The floor is good enough. The night before leaving they organised a little ceremony for me. This mainly involved drinking Kava (this is where the sevu sevu came in handy) in a traditional way, respecting the various customs. Having drunk a few bowls I was tired and went to sleep whilst the rest partied on! (Kava is very mildly narcotic). After 3 more wonderful days in Fiji, playing in rivers, hiking and going fruit picking with the kids I had to head back to Nadi to catch my flight on to New Zealand.