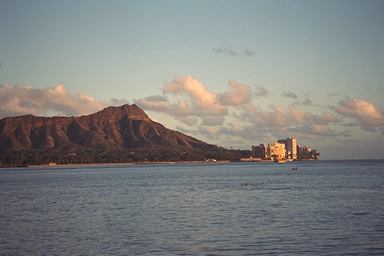 Flying in to Hawaii can be really beautiful, seeing those little green islands all alone in the pacific. You're not disappointed when you land either. Honolulu is Ok. It's got quite a good nightlife and plenty of beaches within walking distance. This makes it an ideal holiday destination and hence the place can be packed with tourists. On O'ahu itself there isn't quiet as much natural beauty as on the other islands. Diamond Head is an interesting crater of an exploded volcano, the North Shore is pretty and is the hang out area for the hundreds of surfers who swarm over Oahu in the main season. Judging by the waves I saw, I can understand why. 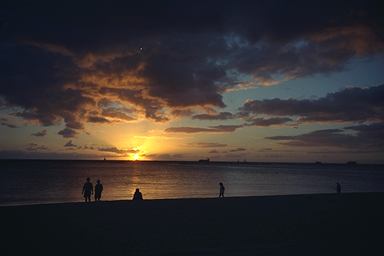 There are other things to see of course. Pearl Harbour is a must for anybody interested in WW2. Also, Hanauma Bay is an absolute must for its marine life. The coral there is almost dead, but out of all the places I went snorkelling, Hanauma Bay had the most interesting and amazingly coloured fish. Well worth the couple of dollars to get into the beach area. A cheap way of touring the island is to go by public transport round the island. This is easily done in a day (including stops) and gives very nice views of the islands and its surroundings.

Having spent about 5 days on O'ahu I decided to check out the other islands and headed for the proper Hawaii, also known as the "Big Island" since it is about twice as big as all the other islands put together. 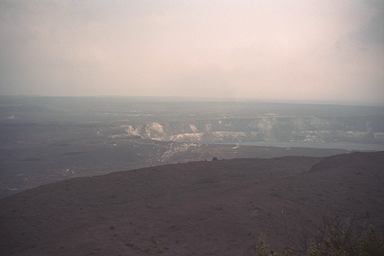 The journey across to The Big Island provides even more fantastic views of the islands than the previous flight. Try sitting on the left of the plane for great views of Maui. I stayed in a place called Arnott's Lodge, which is run by an Australian guy. They offer really good tours of the island and are trying to set up a mini version Kiwi and Oz Experience - known as "The Big Island Experience". I went on several tours to see waterfalls, volcanoes and mountains. All were interesting.

Here you see pictures of Kilauea volcano, which is still active and the tour of this volcano is particularly good. Probably enhanced by the fact that the guide is a native Hawaiian who won't miss an opportunity to slag off the government!! Needless to say the natives aren't too fond of their 'colonisers'. Within this great big crater is another crater known as Kilauea Iki. This has a diameter of a couple of km, so you can imagine the grandeur of this site. There are steam vents everywhere and rumour has it that if your steal any of the stones a Hawaiian goddess will bring much bad luck and disaster to you. Parcels to the local authorities containing 'borrowed' stones are not uncommon.... 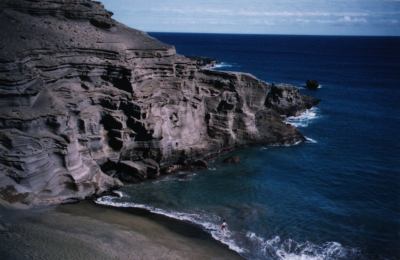 There are loads of beautiful waterfalls on the island and the general scenery is gorgeous. You can also go swimming with wild turtles on a black sand beach and there is even an olivine coloured beach with is a strange site. One thing that really struck me was how warm the water was. Coming from England I am used to the sea being about 15C. On Hawaii the water's so warm it doesn't actually cool you down! 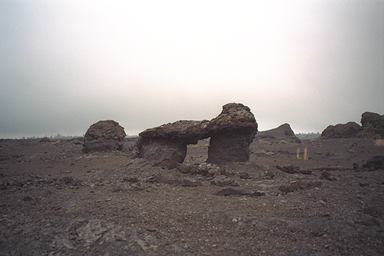 One of the funny things on the volcano tour were the various lava formations that cropped up every now and then. One of the larger ones is on the left. Of course a big reason for going to Hawaii is the hope of seeing live lava flows. And you won't be disappointed. Kilauea is continuously erupting and lava is visible most nights. If you decide go it 'alone' to the main viewpoint be prepared for a long trek over rugged lava fields. Even 4x4's don't go much faster than walking speed. And whatever you do, take a good torch. Me and a friend went alone, but without a torch. After walking for about three hours it was getting dark and we were still 'miles' from the viewpoint. Eventually we turned back, stumbling across a sign saying for your own safety do not pass this point. Oops. Anyway it got pitch black and when you are walking on a lava field, the light from the stars (no moon since it was new moon) is not enough to even see your own feet. Believe me walking on a lava field is difficult enough in the daylight, but in the pitch black it gets a bit dangerous since there can be quite large holes and gaps. Anyway we got back safely eventually thanks to a passing 4x4 which charged us 10 bucks to stand on the back (sitting would have been impossible due to the bumpy ride). I went back the next evening on a tour. A lot more comfortable. 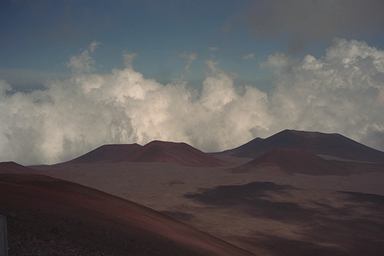 Another interesting, if inactive (I think) volcano is Mauna Kea. It is about 3800m which makes the air quite thin at the top. The summit looks a bit like Mars and the views are excellent, but the weather can change very quickly. It took about 2 minutes for the whole place to be covered in clouds. The guide said we had better get back down again very soon. Of course we all complained, saying it was just a bit of cloud. Well, an hour later it snowed up there and the place was covered in a quite a few inches of snow. Listen to your guide! After eight wonderful days on The Big Island, it was time to head back to Honolulu and catch a flight to Fiji.