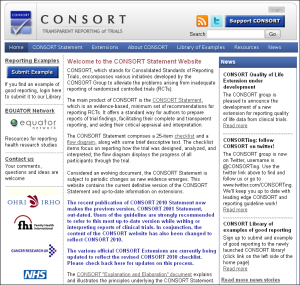 CONSORT stands for Consolidated Standards of Reporting Trials and encompasses various initiatives developed by the CONSORT Group to alleviate the problems arising from inadequate reporting of randomized controlled trials (RCTs). The main product of CONSORT is the CONSORT Statement which is an evidence-based, minimum set of recommendations for reporting RCTs. It offers a standard way for authors to prepare reports of trial findings, facilitating their complete and transparent reporting, and aiding their critical appraisal and interpretation.

Minervation redesigned the site in summer 2007. This site has a more academic feel to it, which is not really surprising given its content. Whilst you may never have heard of CONSORT, this site is quite popular in the world of RCTs.  In early 2011 a new module was added to let registered users submit examples of good reporting. The site then publishes these in its Library of Examples.